The Diamond Eye is a story of war and secrets; love and friendship. It’s a story of a Soviet student turned sharpshooter, her life during WWII, and her tumultuous goodwill tour of the United States. 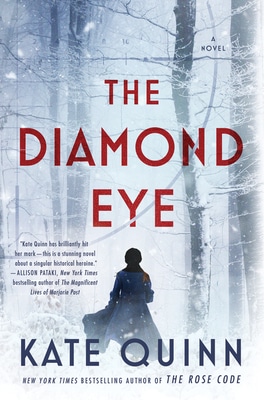 The Diamond Eye by Kate Quinn

“An unforgettable World War II take of a quiet bookworm who becomes history’s deadliest female sniper.” (from the book jacket)

Mila Pavlichenko is a young, single mother and student trying to do everything – be the perfect mother and father to her son, excel in school in order to realize her dream of becoming a historian. She takes up shooting in her spare time to prove that her son doesn’t need his absentee father – she could and would teach him anything he was interested in.

When Germany invades the Soviet Union, Mila leaves all of that behind to join the fight against the Nazis. She doesn’t do it for her country, but for her family and her future. On the battlefield, she once again strives to be perfect, to prove herself to all of those who doubt her. She is one of the Soviet Union’s best snipers, known as Lady Death.

Mila is so successful that she is eventually chosen to join a Soviet delegation on a goodwill tour of the United States. But that tour is anything but quiet. Mila receives threats, has to rebuff her estranged husband, and ends up in the middle of a battle she never saw coming.

Kate Quinn is one of my favorite historical fiction authors – The Rose Code, The Huntress and The Alice Network are some of my favorite books in this genre. While The Diamond Eye wasn’t my favorite, I did enjoy it. Like Quinn’s other novels, The Diamond Eye is based on a true story and has a strong female protagonist. Mila isn’t the most endearing character but I couldn’t help but like her for her determination, perseverance, and her loyalty.

This novel has something for everyone – war and battles; love and friendship; all sorts of family dynamics. There’s both adventure and heart. The plot was interesting and engaging, the story well-written.

One of the strengths of this book was the representation of and differences between so many unique cultures. Quinn often represented Soviet culture in contrast to Ukrainian, German, and American culture.  The juxtaposition between the Soviet delegations and the various American cultures (among the political elite in the capitol, in New England, in the midwest) is the most pronounced but the others are there.

The Diamond Eye had everything that makes a great story. However, the part that wasn’t entirely seamless for me – the reason I didn’t love it as much as others – is that I had a little trouble with the shifts in perspective between chapters. I just had a little more trouble than usual with this format. Perhaps there was just too much? The different perspectives included:

While those point of view shifts weren’t as seamless for me as in other books, I did enjoy The Diamond Eye and would recommend it to fans of historical fiction novels.