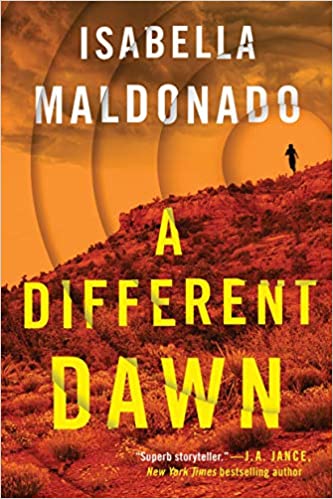 A Different Dawn by Isabella Maldonado

The story of Nina Guerrera, foster child turned FBI Special Agent, continues in the second book of the series.

A family in Phoenix is murdered in their sleep, and the crime is linked to one four years earlier in New York, through a footprint. The FBI is brought in to determine whether the two cases are linked. Very quickly, the team – including Nina and her team from the first book in the series – determine that not only are the two crimes linked, they are the most recent two crimes in a series of murders going back years.

The killer eluded detection for so long for a few reasons reasons. First, the murders were staged as murder-suicides. Secondly, he only strikes once every four years. On Leap Day. And almost never in the same city. Can Nina and the FBI link all of the cases and find the murderer?

No need to read the first book in the series, The Cipher, although you can read my review of it here. I will admit, I did enjoy it more than this one.

Like the previous book, I opted to listen to A Different Dawn as an audiobook, rather than read it (more on the format below). My husband and I listened to it while taking a late summer road trip, and it did do the job of entertaining us and making the miles pass quickly. Like the first in the series, there was a pretty good plot twist that I didn’t see coming. That being said, after that twist, there was a big element that ended up being ridiculously predictable. That was disappointing to me.

I did like how the book continued to pull in some of Nina’s Latin culture, particularly focusing on a childhood ghost story-like folktale. Given her background, it was also nice to see how she was introduced to other elements of a Latin upbringing, which she didn’t get to experience in the foster system.

The main characters were largely the same – everyone was fairly likeable, and there was some character development in Nina that was nice to see. I really liked some of the secondary characters in the story. They were personable and well-written, enough to pull at my heartstrings a bit.

While I own both the digital ebook and the Audible copy, I ended up listening to the book on Audible during a summer road trip. As I mentioned in my review of The Cipher, I can be pretty picky about my audiobooks. This one earns a major point from me for having the same (likeable) narrator as the first. (I hate it when a series switches narrators – it ruins the listening experience for me). However, it wasn’t done quite as well as the first book. I noticed several awkwardly long pauses at multiple points in the narration. It wasn’t enough to ruin the story but was definitely noticeable. Perhaps a bad editing job? But it was nice and light and didn’t require me to pay close attention to enjoy the story.

While not my favorite book by any means, A Different Dawn was an entertaining way to pass the hours in the car. Not sure I’d pick it up to read, but I would listen to it again while multitasking.