This 4-ingredient Cinnamon Spice Hot Toddy features bright spicy cinnamon flavors and belly-warming liquor in a beverage that will warm you up, no matter how cold it is outside. Today kicks off a 6-week Winter Warm-Up Drink Series, hosted by Ellen at Family Around the Table. So every Friday for the next 5 weeks (I hope), I’ll be bringing you a new winter drink recipe, as well as a whole bunch of recipes from my blogging friends,designed to keep you warm during these frigid winter months. Our little group has started the week strong, with lots of recipes I want to try: I have a confession. Throughout the winter months, I’d routinely see recipes for hot toddies, but I never really knew what one was. Wikipedia defines a Hot Toddy as “a mixed drink made of liquor and water with honey (or, in some recipes, sugar), herbs (such as tea) and spices.” With that definition, I can get on board with that, can’t you?

But here’s the thing. I kept seeing recipes suggesting whiskey or bourbon as the main liquor, and that’s not really my thing, so I was hesitant to even try one.

Last year I ended up getting a bad cold and feeling pretty miserable and finally decided to give one a try. Somewhere, I found a version that used cinnamon tea – one of my favorite black teas. It’s become a recipe that I make time and time again during the colder months. Although it doesn’t hold strictly to Wikipedia’s definitions, I’m still calling this a hot toddy. Easy as can be, bright spicy cinnamon flavors, and a little extra warmth from the liquor. I have made this recipe with bourbon, brandy and spiced rum (Captain Morgan Black Spiced Rum to be exact), all with good results, although the latter is my favorite.

Do you enjoy hot toddies? Leave me a comment and tell me about your favorite recipe or flavor combination! 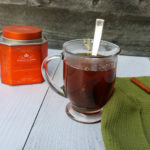 This 4-ingredient Cinnamon Spice Hot Toddy features bright spicy cinnamon flavors and belly-warming liquor in a beverage that will warm you up, no matter how cold it is outside.

Quantity of water and liquor used will depend on your mug. Mine was very large, so I used 10 oz. hot water and 2 oz. brandy (or other liquor). If you use a smaller mug, you may want to use a little less liquor.

The nutrition information for this post has been calculated using 2 oz. brandy.