Shake up your appetizer game with this Mediterranean Layer Dip. Healthy, flavorful, and easy, this dip has proven to be a hit, again and again. Lately, I’ve had a difficult time deciding what to make in the kitchen. I’ve been tired and my hands have been bothering me (fun pregnancy symptom), so whatever I make has to be quick and easy. I haven’t been super inspired by anything – I’ll settle on a recipe and then a bit later, change my mind…

It was the same thing a couple of weeks ago for Superbowl. I hemmed and hawed but ultimate decided on this Mediterranean Layer Dip, which I’ve had bookmarked for a while. I was not disappointed – the dip was fantastic! It had lots of flavor and was easy to customize to personal taste. I can’t wait to make it again. That horrible photo is from when this post first went live in 2013. I’ve gotten much better with photography now, 6 years later. 🙂

Since this post went live, I’ve made this recipe again and again. It’s become one of my favorite appetizers. It’s just unusual enough to be intriguing but has enough everyday ingredients to still be approachable. I don’t think I’ve met anyone who hasn’t loved this healthy and surprising dip. I like to serve it with freshly cut pita wedges and cucumber slices (for a lighter fare) but I’ve also served it with pita chips and other assorted cut vegetables.

One lesson I’ve learned? Make a big batch – I rarely have any leftover. 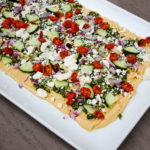 Ingredients for the Oven-Dried Tomatoes:

Ingredients for the Cilantro Pesto: This post was updated with new photos, updated text, and a more user-friendly format in Sept. 2019. The recipe remains unchanged.