Guys, this fall has turned out to be way busier than I ever planned it to be, and things don’t seem to be slowing down. It’s so bad that I think I’ve accepted that I won’t be hosting a holiday party this year, or even a brunch for our closest friends. I LOVE the annual tradition, but you know what, I just have to keep myself sane. And this year, there’s just no way I can commit to it.

So instead, I’ll talk to you about last year. I hosted a brunch for a couple of our closest family friends. While I missed our annual party, I switched it out for a brunch so that close friends could bring their young children without having to bump into nap time. And I shrunk the guest list way down to keep from stressing out and spending hours cooking and baking. Even though the brunch was simpler than my child-free parties, I still wanted to do a little something special for friends. The children received small Christmas gifts, the men received boozy brownies, and the woman received sweet, cinnamony Chex Mix. Want to talk about a snack that is like crack? Both the ladies and the lucky children who snuck fistfuls loved it. I couldn’t stop eating the leftovers. It’s quick and easy to make and is soooo yummy. Gift it as a gift, serve or bring it to an upcoming holiday gathering, or hoard it for yourself. There’s no wrong answer. 🙂 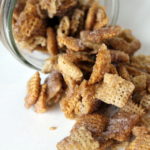 This recipe was adapted from Confessions of a Cookbook Queen

Check out more fabulous food gifts for the holidays.