A couple of weeks ago, my hubby invited some friends over for the first college football game of the season. He promised light snacks, and everyone was coming over around 6:30. Light snacks? Really? Chips and dip were never going to suffice. We definitely needed something more substantial. These Ultimate Grilled Cheese Sandwiches satisfied that requirement – I couldn’t make them fast enough!

The only real changes I made to this recipe were the bread (my grocery store didn’t have sour dough so I used French bread) and the serving size. I don’t know if the bread was smaller or if I used less cheese and bacon, or a little bit of both, but I actually got more like 10 sandwiches out of this recipe. Ina also suggested shredding the cheese and crumbling the bacon. I ended up leaving the bacon slices whole (or halved when necessary) and “shredding” the cheese with a knife, so that I ended up with pieces larger than a traditional shredder would make. In the future (and in the recipe below), I actually changed this step, so that the cheese is thinly sliced. It will be easier to get more cheese on the sandwiches, and will keep the cheese from falling off when grilling.

Recipe chosen by Rebecca of Ezra Pound Cake, of Barefoot Bloggers, from Ina’s new book, How Easy is That? to be released this October.

Adapted from Ina Garten’s How Easy is That?

Make the Bacon: Preheat oven to 400F. Prepare a rimmed baking sheet with foil on the bottom (optional – makes for easy clean up) and a baking rack inserted on top. Lay bacon in a single layer over baking rack. Cook about 20-30 minutes “until nicely browned.” (I cooked mine for about 40 minutes to get the bacon crunchy.) When done, set on a plate lined with paper towels.

Assemble the Sandwiches: In a small bowl, combine mayo, mustard, Parmesan, salt and pepper. Spread half of the bread with a generous serving of the mayo mixture. Add cheese (1 oz. each cheddar and Gruyère / comte, about 1/3 cup total if grated) and 1-2 slices bacon. Top with other slice of bread.

If using a Panini press on the stove, heat the Panini press over medium heat. Meanwhile, either spread butter on sandwiches (both sides), or melt butter, and when Panini press is hot, brush butter on both sides of the pan. Cook 3-5 minutes, flipping as needed. Allow to cool a couple of minutes before serving. Want to know a secret? While mixing up a packet of seasoning is a quick way to make onion dip, there’s a better option. Homemade onion dip is way better and it’s not hard. It takes about 30 minutes of prep and cook time and BAM! You have a flavorful and sweeter dip, and guess what? You know every single ingredient that goes into it! See, I had always had onion dip that came from a packet, or some store-bought version, and I was never a bit fan. It was just too… oniony. Too processed. And then a friend brought a homemade version to our house one day and I totally changed my tune. This is sweet and fresh. I couldn’t stop eating it. An added bonus is that this dip is definitely a recipe to make ahead. The longer it sits, the longer the flavors infuse into the sour cream and mayo. Serve with veggies, crackers, or chips. 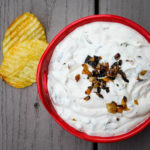 If desired, you may reserve a tablespoon of caramelized onions to garnish the dip just before serving.

This recipe was adapted from Alton Brown. This post, one of the first on the blog, was updated with new photos and updated formatting in 2018. The old photos didn’t do the dip justice, trust me.

Bacon, dates and pineapple come together in a quick, sweet 3-ingredient appetizer that’s hard to stop at only one. A friend brought this appetizer over one night, and it has become one of my husband’s favorites (Thanks S!). I have never had dates, but this yummy bite tastes like candy – sweet and soft. And although it is best served hot, this little bite takes only a few minutes to assemble, making it easy for entertaining. We especially like to make these for game day – the guys just go crazy over them.

Note on preparation: Learn from my mistakes – Do NOT cook these on foil on a baking sheet, but on a boiler pan. I tried using foil once in the past – they didn’t get crispy and the foil ended up tearing, leaving a juicy mess in the oven – and yes, it burned and we got to listen to the smoke alarm 4 times before getting to savor these sweet treats. 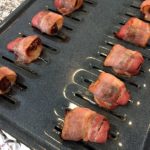 Bacon, dates and pineapple come together in a quick, sweet 3-ingredient appetizer that’s hard to stop at only one.