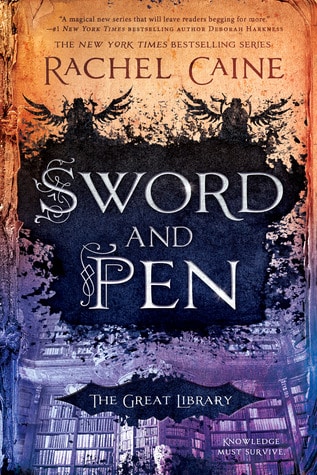 Review/Recommendation: I loved this series and totally missed that this final book was released last year (2019). When I discovered my miss, I quickly ordered the book to read on my Kindle app finished up the suspense novel I was reading, anxious to start this one.

Despite not having read any part of the series in a couple of years, it very quickly came back to me. Like the other books, Sword and Pen does pick up where the last left off, so this series really needs to be read in order. But if you have to take a break for a couple months (or longer), I think you’ll be able to jump back in – Caine does a good job of giving you enough information to fill in the blanks and remember the story, without having to reiterate everything that already happened.

I like the unique world Caine created in these books – a world created from an alternate view of history. The book was thoroughly enjoyable with an engaging, fast-paced plot filled with twists and turns, a little mystery and lots of adventure. I’ll also call out that in this final book, there are very little romantic undertones, something that seemed more present in earlier books in the series.

One of the strengths of this series was the characters. While it’s been a while since I’ve read the others, which may skew my perception, I do feel like the characters remained likable, more real. Sure, several had their own struggles and issues to work through but not once did any of the characters start getting on my nerves. Instead, throughout the series, you watched each of them grow up and mature and in Sword and Pen, really make the leap from student to master, each in their own area of interest and specialization. It was definitely an interesting shift in their own perspective as the characters realized that they were now adults, who were in charge of their own (and others) destinies and who were responsible for their own (and others) mortality.

This is one young adult series that I’d highly recommend. I know my husband would absolutely love it, and probably devour the set of 5 books within a week, once he started reading.

Have you read any of the books? What did you think of the series?